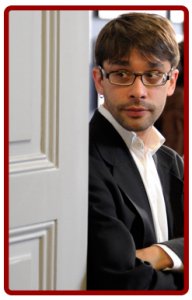 “Music is the main driving force in my life. It gives me insight into my own self and enables me to reach others in a profound and beautiful way. I have felt this power of music ever since I first came in contact with it as a child: at home, listening to my mother sing, and at church, singing liturgical music in harmony with the other churchgoers. Later on, after joining the Benedictine monastery in Sao Paulo, Brazil, I continued to feel this power over and over again, while singing Gregorian Chants, hearing the pipe organ and, of course, hearing the works of J.S. Bach for the first time. With every musical experience, I become more convinced of music’s unique and magical power to inspire and bring us closer together.”
Hiram Santos

Hiram Santos, a Swiss-Brazilian artist, holds an M.A. in Church Music and Choir Conducting from the Zurich University of the Arts (Zürcher Hochschule der Künste), where he studied with Prof. Markus Utz and Prof. Beat Schäfer. Mr. Santos is currently the choir director the Stadtchor Zofigen, Reformed Church Wangen bei Olten and the Philo-Chor der Uni-Basel. In addition, he is the assistant conductor at the SCHMAZ male choir in Zürich. Mr. Santos’s past positions as choir director included the Female Choir Pratteln, the Gospel Choir Kaiseraugst, and choirs of the Roman Catholic Church Gelterkinden and the Roman Catholic Church Porrentruy.

Mr. Santos first had the opportunity to develop his interest in singing as a young novice and later as a junior monk at the Benedictine monastery in São Paulo, Brazil during daily Gregorian Chant practice. He went on to receive training in singing with Carolyn Finley in the USA and worked actively at the St. John’s Boys Choir in Minnesota, USA. After leaving the monastery, Mr. Santos moved to Europe for further music training. He studied singing with Sharon Weller and Scott Weir, historical bassoon with Donna Agrell and Lorenzo Alpert, as well as historical timpani with Philip Tarr and Dieter Dyk. Mr. Santos holds a specialized Diploma in Early Music (M.A. in Music Performance) from the Schola Cantorum Basiliensis (Musik-Akademie Basel) in Switzerland.

Drawing on his diverse musical background and in-depth knowledge of choir repertoire, Mr. Santos enjoys the privilege of leading choirs into their discovery of the inspiring and restorative power of music. Past projects with his choirs include  the performance of Cantatas bei J.S. Bach (BWV 140, BWV 218, BWV 74, BWV 233), Johann Kuhnau (Gott sein mir gnädig), Johann Krieger (Danket dem Herrn) with period instruments in Olten, a premier of Thomas Leininger’s “In horto Patris mei” Mass for women’s choir and orchestra, a performance of J.D. Zelenka’s Magnificats in C and D with period instruments in Gelterkinden, and weekend workshops on choir singing in Wangen bei Olten.

Alongside his conducting activity, Mr. Santos is the artistic director of Capella MD (a vocal ensemble for renaissance music) and Symphonisten (an instrumental ensemble for early music). As a bassoonist and timpanist/percussionist he is a frequent participant in musical productions across Europe, Asia and the Americas.

Mr. Santos strives to inspire others to achieve their musical goals by promoting hard work, perseverance and musical quality in an enjoyable and dynamic environment. Furthermore, Mr. Santos’s multicultural background brings versatility to all of his professional activities.

“Music is a moral law. It gives a soul to the universe, wings to the mind, flight to the imagination, a charm to sadness, gaiety and life to everything. It is the essence of order, and leads to all that is good, just, and beautiful, of which it is the invisible, but nevertheless dazzling, passionate, and eternal form.”